The National Sprayer Testing Scheme has become familiar since its launch in 2003 and satisfies the sprayer testing requirements of the Sustainable Use Directive. Now the spotlight is on fertiliser spreaders with AEA’s launch of the National Spreader Testing Scheme at Tillage Live. This is hardly surprising bearing in mind the application of nitrogen roughly doubles the yield of most arable crops and uneven spreading reduces margins and can increase the risk of nitrogen loss. Poor spreading also can directly contaminate water courses and conservation field margins.

A well set up and operated spreader should give a CV of around 10% in a tray test. Often when a machine is tested at the end of a season, the CV is 20-25%, a level of uneven spreading that could result in crop striping and will result in financial loss. So it really is important to get every spreader tray tested before spreading starts in spring.

You can do your own tray test on-farm but unless you're experienced it’s a very difficult job to do properly - a lot more is involved than just driving over a row of trays. Use a professional to avoid errors, forgotten items, unnecessary waste of time and general misery. The testing kit also is expensive - around £2000. The cost of a professional test, around £250, can be recouped in a few hectares through better spreading.

For many years, SCS (Spreader & Sprayer Testing Ltd) has provided a national spreader testing service and the company has been involved from the start in the development of the new National Spreader Testing Scheme. As a result, the scheme and the standards that it sets are based on much practical experience. Testers providing the new scheme will need the City & Guilds Level 2 Award in Fertiliser Spreader Testing http://www.nptc.org.uk/qualificationschemes.aspx?search=ZmVydGlsaXNlciBzcHJlYWRlcg. SCS offers training for this to testers that join the company. Further details of the scheme, which will sit alongside the National Sprayer Testing Scheme, will be at the NSTS website www.nsts.org.uk.

The National Spreader Testing Scheme has broad industry support from Tried & Tested and fertiliser spreader manufacturers. Its introduction should finally change some numbers in the British Survey of Fertiliser Practice which for many years has indicated that around 40% of farms do not tray test fertiliser spreaders at least annually. 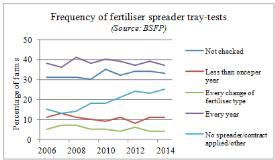